Most historians and archaeologists maintain that civilization as we know it began about 5,000 years ago with the emergence of the earliest Egyptian dynasty. But, a small yet persuasive number of scientists believes that a highly advanced civilization, nearly twice as old, flourished during the last Ice Age. Solid evidence of this 10,000-year-old civilization is difficult to produce, but some feel a recent discovery off the coast of a tiny Japanese island, Yonaguni, may be the proof they seek.

The Money Masters - How International Bankers Gained Control of America 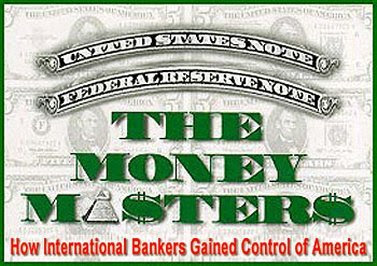 "The powers of financial capitalism had a far-reaching plan, nothing less than to create a world system of financial control in private hands able to dominate the political system of each country and the economy of the world as a whole...Their secret is that they have annexed from governments, monarchies, and republics the power to create the world's money..."

." THE MONEY MASTERS is a 3 1/2 hour non-fiction, historical documentary that traces the origins of the political power structure that rules our nation and the world today. The modern political power structure has its roots in the hidden manipulation and accumulation of gold and other forms of money. The development of fractional reserve banking practices in the 17th century brought to a cunning sophistication the secret techniques initially used by goldsmiths fraudulently to accumulate wealth. With the formation of the privately-owned Bank of England in 1694, the yoke of economic slavery to a privately-owned "central" bank was first forced upon the backs of an entire nation, not removed but only made heavier with the passing of the three centuries to our day. Nation after nation, including America, has fallen prey to this cabal of international central bankers.