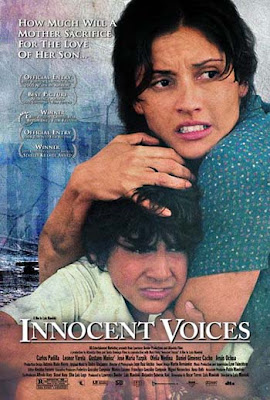 Last night on TV I watched this Film, for some reason the Italian station changed the name of the film to "Figli della guerra". The film is about the war in El Salvador and the impact it has on the kids.

After watching the film I looked on Google for the real name of the film and tried to find more information about it since it is a Biography and found some really interesting information.

The film, set in El Salvador during the years of civil war in the ‘80s, is told through the voice and eyes of 11-year old Chava. He lives with his mother, two brothers and a sister in a cardboard-house in a village, and at age 12 will be ‘eligible’ to be taken into the “ejercito” (army). He tries to avoid it so that he can have a “normal” childhood. Winner of many awards.

Voces inocentes (English title: Innocent Voices) is a 2004 Mexican film directed by Luis Mandoki. The plot is set during the Salvadoran Civil War in 1980s, and is based on writer Oscar Torres's childhood. The film serves as a general commentary on the military use of children. The movie also shows injustice against innocent people who are forced to fight in the war. It follows the story of the narrator, a boy named Chava.

Here is the official website on which you can watch the trailer.

And this is the best part that I found on youtube.

At the moment I`mtrying to find a version of the film with English Subtitles
Publicado por malteseken en 7:43 p. m. 4 comentarios: Enlaces a esta entrada