Zookeeper Emad Jamil Qasim looks at the remains of a pregnant camel at the Gaza zoo. A missile fired by Israelitroops shot through the back of the camel. In every corner of the zoo and in every cage lie dead animals.


Monkeys and camels were among many animals killed by Israeli fire at a Gaza zoo.

The Gaza Zoo reeks of death. But zookeeper Emad Jameel Qasim doesn't appear to react to the stench as he walks around the animals' enclosures.

A month ago, it was attracting families - he says the zoo drew up to 1,000 visitors each day. He points at the foot-long hole in the camel in one of the enclosures.

"This camel was pregnant, a missile went into her back," he tells us. "Look, look at her face. She was in pain when she died."

Around every corner, inside almost every cage are dead animals, who have been lying in their cages since the Israeli incursion.

Qasim doesn't understand why they chose to destroy his zoo. And it's difficult to disagree with him. Most of them have been shot at point blank range.

"The first thing the Israelis did was shoot at the lions - the animals ran out of their cage and into the office building. Actually they hid there."

The two lions are back in their enclosure. The female is pregnant, and lies heavily on the ground, occasionally swishing her tail. Qasim stands unusually close to them, but they don't seem bothered by his presence.

As he takes us around, he is obviously appalled at the state of the animals. The few animals that have survived appear weak and disturbed.

"The foxes ate each other because we couldn't get to them in time. We had many here." There are carcasses everywhere and the last surviving fox is quivering in the corner.

The zoo opened in late 2005, with money from local and international NGOs. There were 40 types of animals, a children's library, a playground and cultural centre housed at the facility.

Inside the main building, soldiers defaced the walls, ripped out one of the toilets and removed all of the hard drives from the office computers. We asked him why they targeted the zoo. He laughs. "I don't know. You have to go and ask the Israelis. This is a place where people come to relax and enjoy themselves. It's not a place of politics."

Israel has accused Hamas of firing rockets from civilian areas. Qasim reacts angrily when we raise the subject.

"Let me answer that with a question. We are under attack. There was not a single person in this zoo. Just the animals. We all fled before they came. What purpose does it serve to walk around shooting animals and destroying the place?"

Inside one cage lie three dead monkeys and another two in the cage beside them. Two more escaped and have yet to return. He points to a clay pot. "They tried to hide", he says of a mother and baby half-tucked inside.

Qasim says that his main two priorities at the moment are rebuilding the zoo and taking the Israeli army to court. For the first, he says he will need close to $200,000(Dh734,000) to return the zoo to its former state - and he wants the Israelis to cover the costs. "They have to pay me for all this damage."

We ask him why it's so important for Gaza to have a zoo. "During the past four years it was the most popular place for kids. They came from all over the Gaza Strip. There was nowhere else for people to go."

Has Israel gone berserk and lost all sense of reasoning? Should it be tried for war crimes at The Hague?

FAIR USE NOTICE: This blog may contain copyrighted material. Such material is made available for educational purposes, to advance understanding of human rights, democracy, scientific, moral, ethical, and social justice issues, etc. This constitutes a ‘fair use’ of any such copyrighted material as provided for in Title 17 U.S.C. section 107 of the US Copyright Law. In accordance with Title 17 U.S.C. Section 107, the material on this site is distributed without profit to those who have expressed a prior interest in receiving the included information for research and educational purposes. If you wish to use copyrighted material from this site for purposes of your own that go beyond ‘fair use’, you must obtain permission from the copyright owner. 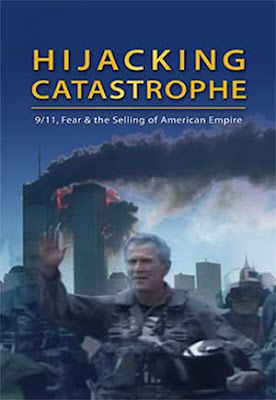 The war against Iraq is also a never-ending subject for debates between left-wing and right-wing, but this documentary shows and reminds us all from the facts and reasons, that drove U.S. to attack middle-east once again. Michael Moore gave his personal view with Fahrenheit 9/11 and successfully told what he thinks about Bush and his friends in Capitol Hill. Hijacking Catastrophe on the other hand, gives us much more and goes very deep into economy of America and history and presence of Project for the New American Century (yes, there is a "project" that has a website at http://www.newamericancentury.org). If Fahrenheit 9/11 was disturbingly great political stance, Hijacking Catastrophe is frightening experience that gives you emotions of anger, sadness and also fear.

Direction of Jeremy Earp and Sut Jhally is strong with perfectly controlled and respectable use variety of persons interviewed. Those who are first to blame Hijacking Catastrophe as left-wing slander propaganda, should know that you can hear and see ex-Delta Force, Rangers and Special Forces soldier Stan Goff, Lt. Col. Karen Kwiatkowski from U.S. Air Force and Scott Ritter, a ballistic missile technology expert telling what they have been seeing and experiencing during their years in military. Of course, they are sharp interviews of Noam Chomsky, Norman Mailer and many other intelligent individuals who are credible enough to open our eyes. The fact that there are no fanatic and overblown preaching involved, makes Hijacking Catastrophe a strong experience that needs to be seen many times. On top of interviews and TV news flashes, the narration of civil rights activist Julian Bond tightens the information that doesn't leave you with many questions. In the end, you can understand the reasons of these neo-conservatives but you don't have to accept them.

Hijacking Catastrophe: 9/11, Fear & the Selling of American Empire is intelligent piece of documentary cinema, that deserves a lot of more attention. It raises up many interesting views between the acts of U.S. government and Nazi leader Herman Goering. Quote of Goering from Nuremberg trials: "The people can always be brought to the bidding of the leaders. That is easy. All you have to do is tell them they are being attacked and denounce the peacemakers for lack of patriotism and exposing the country to danger. It works the same in any country.". Just visit the before-mentioned website of Project for the New American Century, watch Fox News Channel or their website at foxnews.com and take a look what Dubya have recently said (about Iran and Syria, for example). Or just watch Hijacking Catastrophe. It's all here, before Bush said anything. The makers of the film are not prophets, they have only collected visible information into one film in very intelligent way.

Media Education Foundation does a great and respectable job producing critical documentaries to people (and living up to its name!), who are all alone with corporate-controlled media - television and newspaper. If you are in doubt, check Hijacking Catastrophe out as soon as possible. There are fine examples of TV propaganda included in this documentary, that you haven't been noticing. Until now.