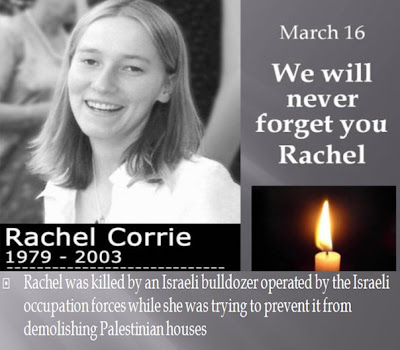 Rachel Aliene Corrie (April 10, 1979 – March 16, 2003) was an American member of the International Solidarity Movement (ISM) who traveled to the Gaza Strip during the Second Intifada. She was killed by a bulldozer operated by the Israel Defense Forces (IDF) during a protest against the destruction of Palestinian homes by the IDF in the Gaza Strip.[1] The details of the events surrounding Corrie's death are disputed.

You heard of Rachel Corrie?
The press won't tell her story
Caught between a house and bulldozer
She found out that Israel
Hates gardens and it will kill
Americans who help rebuild the Gaza Strip.

Rachel I hope you find justice or even a
Garden where anyone can grow some food in peace
No guns, no need to fight. No poor, no black no white,
Heaven, you deserve a break from misery