Posted on June 1, 2008 by dandelionsalad

Bolivia may have its first-ever indigenous president, but racism is alive and well in this country, as demonstrated by the public humiliation of a group of around 50 indigenous mayors, town councillors and community leaders in the south-central city of Sucre.

The incident, which shook the country but received little attention from the international press, occurred on May 25, when President Evo Morales, an Aymara Indian, was to appear in a public ceremony in Sucre to deliver 50 ambulances for rural communities and announce funding for municipal projects.

But in the early hours of May 25, organised groups opposed to Morales began to surround the stadium where he was to appear. Confronting the police and soldiers with sticks, stones and dynamite, they managed to occupy the stadium.

The president cancelled his visit, and the security forces were withdrawn to avoid bloodshed.

But violent elements of the Interinstitutional Committee, a conservative pro-autonomy, anti-Morales civic group that is backed by the local university and other bodies, continued to harass and beat supporters of the governing Movement Towards Socialism (MAS) and anyone who appeared to be indigenous.

A mob of armed civilians, partially made up of university students, then surrounded several dozen indigenous Morales supporters, including local authorities who had come from other regions to attend the ceremony.

The terrified indigenous people, who had sought refuge in a poor neighbourhood on the outskirts of Sucre, were stripped of their few belongings and forced to walk seven kilometres to the House of Liberty, a symbol of the end of colonial rule in Bolivia that was declared there in 1825.

In the city’s main square, they were forced to kneel — shirtless — and apologise for coming to Sucre. They were also made to chant insults like “Die Evo!”

They were surrounded by activists from the pro-autonomy movement, who set fire to the blue, black and white MAS party flag, the multicolour flag of the Aymara people and colourful hand-woven indigenous ponchos seized from the visiting Morales supporters.

Sucre Mayor Aidee Nava and the Interinstitutional Committee immediately apologised after the incident. Morales called on Sucre officials to bring those responsible to justice.

Indigenous people in Bolivia have long suffered discrimination. They were not even allowed to vote until 1952, when the government of the Nationalist Revolutionary Movement (MNR) abolished pongaje — a system of forced labour for indigenous people in rural areas.

South America’s poorest country is divided between the western highlands, home to the poor indigenous majority, and the much wealthier eastern provinces that account for most of the country’s natural gas production, industry and agribusiness. The population of eastern Bolivia tends to be of more European and mixed-race descent.

Santa Cruz, Bolivia’s richest province, is at the vanguard of an autonomy movement that involves six of the country’s nine regions. People in Santa Cruz voted in favour of regional autonomy in a May 4 referendum, and three other eastern provinces will hold similar referendums in June.

Analysts say that underlying the autonomy movement, which is spearheaded by the right-wing business and political elites who governed Bolivia for decades, is the question of control and use of Bolivia’s natural resources.

The aim of the left-wing Morales government is to distribute the nation’s wealth more evenly, in order to improve the living conditions of the country’s indigenous people — most of whom live in appalling poverty.

According to MAS representatives and an independent analyst who spoke to Inter-Press Service, the May 25 incident has encouraged Morales supporters to redouble their efforts to bring about structural changes aimed at eradicating inequality and discrimination.

“We are witnessing a backlash by the oligarchy”, Rene Navarro, a MAS representative in the constituent assembly that is rewriting the Bolivian constitution, told IPS. Navarro predicted more violence against indigenous people by the right.

The right is attempting in the media to portray the Sucre violence as part of a government-fomented campaign aimed at further polarising the country along regional lines. But Navarro argued that the racist violence is “a blow to all citizens alike”. He said that the government should publicise what it has achieved over the last two-and-a-half years.

MAS lawmaker Jose Pimentel, a former leader of the country’s miners’ union, told IPS that it was urgently necessary to get the draft constitution approved in a referendum, with the support of the rural indigenous peasants in alliance with the urban poor.

Independent analyst Franco Gamboa agreed that the only option open to the government is to continue forging ahead with the new constitution, the vote on which is being delayed by the autonomy referendums as well as plans for a recall referendum for Morales, his vice president, and the country’s nine provincial governors.

The aim of the new constitution, whose draft was approved by the MAS majority in the constituent assembly in a December vote boycotted by the right, is to create a unified but decentralised state that recognises Bolivia’s cultural and ethnic diversity, while ensuring greater political participation and access to land and other resources by indigenous people.

Gamboa said the reaction of conservative groups in Sucre and the autonomy movements in eastern provinces reflect opposition to the greater political independence and expanded land rights that the new constitution would grant indigenous people — which represent a challenge to the privileges enjoyed by the landowning and business elites.

The new constitution would recognise greater autonomy for the provinces, municipalities and indigenous communities, while the anti-Morales provinces only want decentralisation at the municipal and provincial levels.

Pimentel stressed that “the fact that Morales was elected as the country’s first indigenous president is not sufficient to do away with a racist, neo-colonial state, which is why it is important to reform the constitution”. 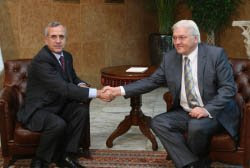 "The Doha agreement is a very important first step to end the crisis," Steinmeier said, referring to the May 21 accord between rival Lebanese factions that ended a 18-month political crisis that had turned deadly.

"The election of a president and the formation of a government are signs of hope," he said, emphasizing that the deal reached in Qatar says that force and weapons should not be used to resolve conflict.

Lebanon's long-running political standoff sparked sectarian clashes last month that left at least 65 people dead. Until Suleiman's election a week ago, the country had been without a head of state since November.

Also on Sunday, Israel freed and then deported to Lebanon Nassim Nisr, convicted by Israel of spying for Hizbullah, and the group handed over what it said were the remains of Israeli soldiers killed in Israel's 34-day war on Lebanon in 2006.

"I hope this is a step in the direction of a prisoner exchange," Steinmeier told reporters after meeting Prime Minister Fouad Siniora later on Sunday.

"I am happy that preliminary steps were taken in that direction and hope that this creates a positive dynamic, building mutual trust. Quick progress will be in the interest of the victims and concerned parties," he said.

Germany is acting as mediator in negotiations between Hizbullah and Israel on a prisoner exchange.

Beirut is the minister's first stop on a Middle East tour that will also take in Occupied Jerusalem and Ramallah.

Steinmeier said it was "encouraging" that Suleiman's inaugural speech supported establishing the international court to try those behind the assassinations of former Premier Rafik Hariri.

Syria maintained a military presence in Lebanon for almost three decades until it was forced to withdraw by the outcry over Hariri's 2005 assassination, which was widely blamed on Damascus. Syria strongly denies any involvement.

Steinmeier underlined that Suleiman's inaugural speech "spoke of a new beginning in relations with Syria."

Syria and Lebanon have no diplomatic representation.

Germany is a former commander and current member of the UN naval force patrolling Lebanese waters to keep the peace with Israel. - AFP


KFC suppliers cram birds into huge waste-filled factories, breed and drug them to grow so large that they can’t even walk, and often break their wings and legs. At slaughter, the birds’ throats are slit and they are dropped into tanks of scalding-hot water—often while they are still conscious. It would be illegal for KFC to abuse dogs, cats, pigs, or cows in these ways.

KFC’s own animal welfare advisors have asked the company to take steps to eliminate these abuses, but KFC refuses to do so. Many advisors have now resigned in frustration.