Who Created the Modern Day State of Israel? When Did All This Killing Start? Who's Idea Was this? 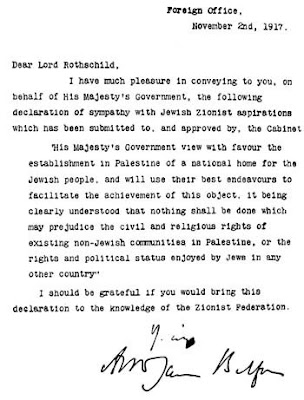 The Balfour Declaration and the Zimmermann Note

In trying to unravel the puzzle of why Britain issued the Balfour Declaration, perhaps the first need is to establish that a puzzle really exists. It has been suggested that it can all be explained by money, but I find this hard to accept. At least two statements lead one to believe that the true reason for the issuance of the Balfour Declaration remains hidden. The first is a statement to Parliament in 1922 by Winston Churchill, then colonial secretary, that it should not be thought that, in the Balfour Declaration, Britain gave something to the Jews for which she received nothing in return. The second is Fromkins statement that, in his memoirs, written in the 1930s, Lloyd George says that he issued the Balfour Declaration in gratitude for Weizmanns contributions in wartime acetone production. Fromkin calls this fiction. Usually when people tell lies, it is for the purpose of concealing the truth.

To test this hypothesis we must ask what actually did bring the U.S. into the war. Long-term anti-German propaganda by the British certainly helped to set the stage. But there is little doubt that the actual trigger was the publication of the so-called Zimmermann Note or Zimmermann Telegram. This was a message sent on Jan. l6, 1917, by the German foreign minister, Arthur Zimmermann, via the German ambassador in Washington, to the German minister in Mexico City. It stated that Germany planned to begin unrestricted submarine warfare (meaning not restricted to British ships though still restricted to a war zone around the British Isles) on Feb. 1, that Germany would attempt to keep America neutral, but that should that attempt fail and war become inevitable, the German minister should propose a formal German-Mexican alliance to the Mexican president. One of the aims of the alliance would be the restoration of Mexican sovereignty over Texas, New Mexico, and Arizona.

What did have a dramatic effect was that the note was made public. Let us see how this came about.

Accepted history is that the Zimmermann Note was sent encrypted on Jan. 16, 1917, intercepted by the British and subsequently decoded. In late February the text was given to the U.S. Embassy in London. It was transmitted to Washington and was released to the press on March 1. An uproar followed in the press and in Congress, leading to a declaration of war against Germany on April 6, l9l7.

The Germans must have known that the Zimmermann Note, though only a contingency plan, could be used to their great disadvantage if it were to fall into British hands. The note is said to have been sent, encrypted, to Washington by three different routes, including direct radio transmission. The German Embassy in Washington then sent it, re-encrypted, on to the German legation in Mexico City in an ordinary Western Union telegram. The British should have had no difficulty in intercepting the original Berlin-to-Washington telegram, but the Germans must have been confident that they would be unable to decipher it. The Germans had themselves been intercepting and deciphering Allied radio messages since 1914, so they must have had a good idea what could and could not be done. We should examine the possibility that the Germans were right. We do not actually know that the British were able to decipher the Zimmermann Telegram. All we know is that somehow or other the unenciphered text of the Zimmermann Note came into British hands.

There is at least one other way in which this could have happened. The Zimmermann Note could have been betrayed by Zionists or into Zionist hands in Berlin and smuggled to England and there used for bargaining with the British government.

There were Jews in high places in the Germany of 1917, and some of them no doubt believed in Zionism rather than in assimilation.