The picture that shames Italy 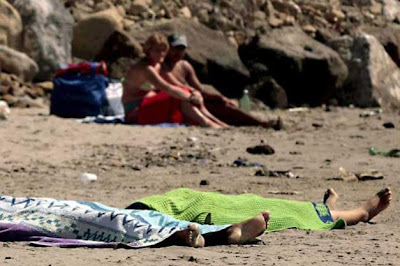 It's another balmy weekend on the beach in Naples. By the rocks, a couple soak up the southern Italian sun. A few metres away, their feet poking from under beach towels that cover their faces and bodies, lie two drowned Roma children.

The girls, Cristina, aged 16, and Violetta, 14, were buried last night as the fallout from the circumstances of their death reverberated throughout Italy.

It is an image that has crystallised the mounting disquiet in the country over the treatment of Roma, coming after camps have been burnt and the government has embarked on a bid to fingerprint every member of the minority. Two young Roma sisters had drowned at Torregaveta beach after taking a dip in treacherous waters. Their corpses were recovered from the sea – then left on the beach for hours while holidaymakers continued to sunbathe and picnic around them.

They had come to the beach on the outskirts of Naples on Saturday with another sister, Diana, nine, and a 16-year-old cousin, Manuela, to make a little money selling coloured magnets and other trinkets to sunbathers. But it was fiercely hot all day and, about 2pm, the girls surrendered to the temptation of a cooling dip – even though they apparently did not know how to swim.

"The sea was rough on Saturday," said Enzo Esposito, the national treasurer of Opera Nomadi, Italy's biggest Roma organisation. "Christina and Violetta went farther out than the other two, and a big wave came out of nowhere and dashed them on to the rocks. For a few moments, they disappeared; Manuela, who was in shallow water with Diana, came to the shore, helped out by people on the beach, and ran to try and get help."

Other reports said that lifeguards from nearby private beaches also tried to help, without success. "When Manuela and Diana came back," Esposito went on, "the bodies of her cousins had reappeared, and they were already dead."

It was the sort of tragedy that could happen on any beach. But what happened next has stunned Italy. The bodies of the two girls were laid on the sand; their sister and cousin were taken away by the police to identify and contact the parents. Some pious soul donated a couple of towels to preserve the most basic decencies. Then beach life resumed.

The indifference was taken as shocking proof that many Italians no longer have human feelings for the Roma, even though the communities have lived side by side for generations.

"This was the other terrible thing," says Mr Esposito, "besides the fact of the girls drowning: the normality. The way people continued to sunbathe, for three hours, just metres away from the bodies. They could have gone to a different beach. It's not possible that you can watch two young people die then carry on as if nothing happened. It showed a terrible lack of sensitivity and respect."

The attitudes of ordinary Italians towards the Roma, never warm, have been chilling for years, aggravated by sensational news coverage of crimes allegedly committed by Gypsies, and a widespread confusion of Roma with ordinary, non-Roma Romanians, who continue to arrive. The Berlusconi government has launched a high-profile campaign against the community, spearheaded by the programme announced by the Interior Minister, Roberto Marroni, to fingerprint the entire Roma population. The move has been condemned inside Italy and beyond as a return to the racial registers introduced by the Fascist regime in the 1930s. The fingerprinting of Roma in Naples began on 19 June.

The most senior Catholic in Naples, Cardinal Crescenzo Sepe, was quick to point out the coarsening of human sentiment which the behaviour on the beach represented. But the Mayor of Monte di Procida, the town on the outskirts of the city where Torregaveta beach is located, defended his citizens' behaviour.

When the Roma girls got into difficulties, he said: "There was a race among the bathers and the coastguard and the carabinieri to try and help them." He rejected the claim that the indifference of the bathers was due to the fact that the girls were Roma.

The two cousins were given a Christian Orthodox funeral service in the Roma camp in Naples, attended by 300 Roma and city and regional representatives.

In a speech yesterday, Mr Maroni proposed, "for humanitarian reasons", granting Italian citizenship to all Roma children in Italy abandoned by their parents.

The Italians and the Roma

Roma have been living in Italy for seven centuries and the country is home to about 150,000, who live mainly in squalid conditions in one of around 700 encampments on the outskirts of major cities such as Rome, Milan and Naples. They amount to less than 0.3 per cent of the population, one of the lowest proportions in Europe. But their poverty and resistance to integration have made them far more conspicuous than other communities. And the influx of thousands more migrants from Romania in the past year has confirmed the view of many Italians that the Gypsies and their eyesore camps are the source of all their problems. The ethnic group is often blamed for petty theft and burglaries. According to a recent newspaper survey, more than two thirds of Italians want Gypsies expelled, whether they hold Italian passports or not.

The Myanmar ruling military has hinted that it might release pro-democracy leader Aung San Suu Kyi in six months time. But critics argue the words are just empty rhetoric.