From the Nakba to Absurdistan 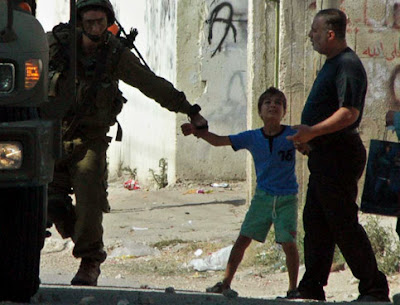 A man pleads with an Israeli soldier detaining a child during an Israeli military operation into the West Bank city of Qalqiliya, May 2008. (Khaleel Reash/MaanImages)

his month Israel celebrated its 60th anniversary and a panoply of politicians and celebrities honored its achievements. The star attraction at the official celebrations was undoubtedly US President George W. Bush, whose praise for Israel reached Biblical proportions. Echoing both Theodor Herzl and the Old Testament in his speech before the Knesset, Bush called the Jewish state "a light unto the nations." But while Israel and its allies applauded six decades of Israeli independence, we Palestinians commemorated the Nakba, our catastrophe, our darkness.

It was not always clear that Palestinians would remember themselves. One of the most widely repeated quotes attributed to David Ben-Gurion, Israel's first prime minister, captures his dismissal of Palestinian pre-existence in what became Israel. "The old will die and the young will forget," he reputedly said. This was only half right: four generations of refugees later, we have not forgotten.

From Beit Lahiya to Beirut, from Nablus to New York, and from Lydd to London, we still remember. We remember how our homeland was partitioned against the will of the majority. We remember how our families fled in fear of massacre and rape, with thousands forced out by Zionist militias. And we remember that while the 1948 War for Palestine wiped our country off the map, it failed to erase our peoplehood.

The act of remembering is in this sense also an act of resistance. We refuse to submit; we decline to disappear; we reject the whiting out of our indigeneity. Through small acts of cultural resistance at home and in exile, we are reclaiming our history.

The establishment of the Nakba Archive, by Palestinians in Lebanon, is a case in point. The Archive, a fraction of which was screened in London's Palestine Film Festival, collates video testimonies from survivors of the 750,000 Palestinians who became refugees in the 1948 War. Currently, it boasts approximately 1,000 hours of interviews conducted with some 500 refugees from over 130 villages. It also maintains an excellent website at www.nakba-archive.org.

A similar project has been initiated in Israel itself, where filmmaker Raneen Geries has recorded testimonies of Palestinian women who were internally displaced in the 1948 War. Just as the fact that Israeli forces destroyed and depopulated over 500 Palestinian villages in the war is little known outside the Arab world, so the history of the internal displacement of approximately 40,000 Palestinians within Israel has been largely silenced. Projects like these are of vital importance because they genuinely give a voice to the voiceless.

But these projects also remind us of a disquieting truth: the Nakba is not over. There are echoes of 1948 among the recent waves of forced migration from conflicts in Iraq and Lebanon, where Palestinian families became refugees for a second, third or even fourth time.

There are echoes of 1948 in the approximately 40 "unrecognized" villages in the south of Israel, where Palestinian citizens of Israel today remain prey to yet further displacement and dispossession. Villages like Atir and Umm al-Hieran have already suffered home demolitions as Israeli authorities prepare for their evacuation and replacement with new, exclusively Jewish, towns.

And there are echoes of 1948 in the collective punishment that is still being inflicted on Palestinians today, most notably in the embargoed Gaza Strip, where approximately 70 percent of the population of 1.5 million are registered refugees. Meanwhile, in the occupied West Bank, Israel's unlawful construction of settlements and the wall is still expropriating Palestinian land for Israeli settlers, still separating family members from one another, and still denying Palestinians freedom of movement in the land of their birth.

The matrix of vulnerabilities that attend this state of statelessness raises an obvious question: if the Nakba is still in progress, then how will it end? Few people believe Annapolis holds the answer. As Palestinian Authority President Mahmoud Abbas recently admitted, "Nothing has been achieved in the negotiations with Israel yet." For all their efforts, neither Abbas nor his appointed Prime Minister Salam Fayyad has secured American intervention to enforce Israel's commitment to freeze settlement expansion. Almost half a million Israeli settlers already live in occupied Palestinian territory, yet Israel continues building to increase this figure yet further.

By now it should be clear that reliance on American benevolence is no strategy for national liberation. As Israeli settlement expansion continues apace, the prospects of a viable Palestinian state emerging at all, let alone by 2009, look ever more remote. Forget Palestine; at this rate, the scraps of land remaining for an "independent" state alongside Israel would have to take their name from a recent novel: Absurdistan.

But if the two-state solution is obsolete, the growing support for a one-state solution should reassure Israelis and Palestinians alike. Within a single democratic state that recognizes the equal value of all its citizens, irrespective of ethno-religious affiliation, we could begin to build a new history of peaceful cooperation and coexistence. This state would truly be a light unto the nations. And when such a state extended invitations to its birthday party, all its peoples could join in the celebrations.

Sharif Hamadeh is a former advisor to the PLO's Negotiations Affairs Department and a former fellow of Adalah - the Legal Center for Arab Minority Rights in Israel. He is currently completing his legal studies in London as a Lord Mansfield scholar of Lincoln's Inn. This commentary first appeared in Adalah's Newsletter, Volume 48, May 2008, and is republished with the author's permission.

Since 2002, the Nakba Archive has recorded over 450 eyewitness testimonies with Palestinian refugees living in Lebanon. This unique collection of interviews reconstructs through personal memories the social, cultural and political life in Palestine prior to 1948, the period that has come to be known as al-Nakba ("the catastrophe"), and documents the events that led to the expulsion