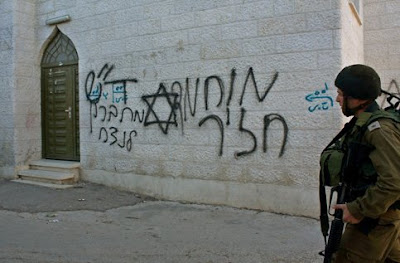 Extremist rabbis and their followers, bent on waging holy war against the Palestinians, are taking over the Israeli army by stealth, according to critics.

In a process one military historian has termed the rapid "theologization" of the Israeli army, there are now entire units of religious combat soldiers, many of them based in West Bank settlements. They answer to hardline rabbis who call for the establishment of a Greater Israel that includes the Occupied Palestinian Territories.

Their influence in shaping the army's goals and methods is starting to be felt, say observers, as more and more graduates from officer courses are also drawn from Israel's religious extremist population.

"We have reached the point where a critical mass of religious soldiers is trying to negotiate with the army about how and for what purpose military force is employed on the battlefield," said Yigal Levy, a political sociologist at the Open University who has written several books on the Israeli army.

The new atmosphere was evident in the "excessive force" used in the recent Gaza operation, Dr Levy said. More than 1,300 Palestinians were killed, a majority of them civilians, and thousands were injured as whole neighborhoods of Gaza were leveled.

"When soldiers, including secular ones, are imbued with theological ideas, it makes them less sensitive to human rights or the suffering of the other side."

The greater role of extremist religious groups in the army came to light last week when it emerged that the army rabbinate had handed out a booklet to soldiers preparing for the recent 22-day Gaza offensive.

Yesh Din, an Israeli human rights group, said the material contained messages "bordering on racist incitement against the Palestinian people" and might have encouraged soldiers to ignore international law.

The booklet quotes extensively from Shlomo Aviner, a far-right rabbi who heads a religious seminary in the Muslim quarter of East Jerusalem. He compares the Palestinians to the Philistines, the Biblical enemy of the Jews.

He advises: "When you show mercy to a cruel enemy, you are being cruel to pure and honest soldiers ... This is a war on murderers." He also cites a Biblical ban on "surrendering a single millimeter" of Greater Israel.

The booklet was approved by the army's chief rabbi, Brig Gen Avichai Ronsky, who is reportedly determined to improve the army's "combat values" after its failure to crush Hizballah in Lebanon in 2006.

Gen Ronsky was appointed three years ago in a move designed, according to the Israeli media, to placate hardline religious elements within the army and the settler community.

Gen Ronsky, himself a settler in the West Bank community of Itimar, near Nablus, is close to far-right groups. According to reports, he pays regular visits to jailed members of Jewish terror groups; he has offered his home to a settler who is under house arrest for wounding Palestinians; and he has introduced senior officers to a small group of extremist settlers who live among more than 150,000 Palestinians in Hebron.

He has also radically overhauled the rabbinate, which was originally founded to offer religious services and ensure religious soldiers were able to observe the sabbath and eat kosher meals in army canteens.

Over the past year the rabbinate has effectively taken over the role of the army's education corps through its Jewish Awareness Department, which co-ordinates its activities with Elad, a settler organization that is active in East Jerusalem.

In October, the Haaretz newspaper quoted an unnamed senior officer who accused the rabbinate of carrying out the religious and political "brainwashing" of troops.

Levy said the army rabbinate's power was growing as the ranks of religious soldiers swelled.

Breaking the Silence, a project run by soldiers seeking to expose the army's behavior against Palestinians, said the booklet handed out to troops in Gaza had originated among Hebron's settlers.

"The document has been around since at least 2003," said Mikhael Manekin, 29, one of the group's directors and himself religiously observant. "But what is new is that the army has been effectively subcontracted to promote the views of the extremist settlers to its soldiers."

The power of the religious right in the army reflected wider social trends inside Israel, Levy said. He pointed out that the rural cooperatives known as kibbutzim that were once home to Israel's secular middle classes and produced the bulk of its officer corps had been on the wane since the early 1980s.

"The vacuum left by their gradual retreat from the army was filled by religious youngsters and by the children of the settlements. They now dominate in many branches of the army."

According to figures cited in the Israeli media, more than one-third of all Israel's combat soldiers are religious, as are more than 40 percent of those graduating from officer courses.

The army has encouraged this trend by creating some two dozen hesder yeshivas, seminaries in which youths can combine Biblical studies with army service in separate religious units. Many of the yeshivas are based in the West Bank, where students are educated by the settlements' extremist rabbis.

Ehud Barak, the defense minister, has rapidly expanded the program, approving four yeshivas, three based in settlements, last summer. Another 10 are reportedly awaiting his approval.

Manekin, however, warned against blaming the violence inflicted on Gaza's civilians solely on the influence of religious extremists.

"The army is still run by the secular elites in Israel and they have always been reckless with regard to the safety of civilians when they wage war. Jewish nationalism that justifies Palestinian deaths is just as dangerous as religious extremism."

Jonathan Cook is a writer and journalist based in Nazareth, Israel. His latest books are Israel and the Clash of Civilisations: Iraq, Iran and the Plan to Remake the Middle East (Pluto Press) and Disappearing Palestine: Israel's Experiments in Human Despair (Zed Books). His website is www.jkcook.net.