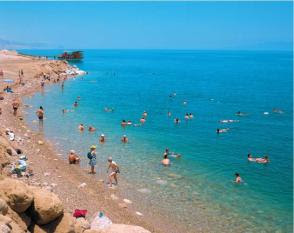 Palestinians are being regularly and illegally barred from reaching Dead Sea beaches in the occupied West Bank, according to a Supreme Court petition filed by Israel's leading civil rights organisation.

The Association of Civil Rights (Acri) in Israel is challenging what it says is the frequently imposed ban by the military on Palestinians seeking to swim or relax at beaches in the northern Dead Sea. The salt-saturated sea is the only open water accessible to Palestinians from the otherwise landlocked West Bank.

The petition says that the Israeli military is using the Beit Ha'arava checkpoint on Route 90 – the only open access route in the occupied West Bank for travel to the Dead Sea – to turn back Palestinians, mainly but not exclusively on weekends and Jewish holidays.

Acri says that the ban is to appease Israeli settlers operating concessions along the Dead Sea's northern shore. They fear losing Jewish customers if there are large numbers of Arabs using the beaches in territory seized by Israel during the Six Day War in 1967.

A Palestinian bus driver, Mohammed Ahmed Nuaga'a, described how he was turned back by the military with a party of children, aged between six and 12, on a school trip from the Hebron district to the Dead Sea last month. The outing had been officially co-ordinated with the Palestinian Authority education ministry and included 10 teachers and 15 parents. He returned a few hours later in the hope that the soldiers would relent but they did not do so. "I tried to explain to them that these are young pupils who came from very far to fulfil a big dream – to see the sea," he said.

"But the soldiers were aggressive, and started shouting at us that Palestinian passage is forbidden, whether children or adults. The pupils begged the soldiers to let them go for even 10 minutes just to see the sea and return, but nothing happened."

In the petition a senior Acri lawyer, Limor Yehuda, says: "We are dealing here with travel bans and entry prohibitions to public places in occupied territory which are tainted with discrimination and characteristic of colonial regimes. We have here prohibitions preventing the protected population of the occupied territory from using its own resources, while the very same resources are put at the disposal and enjoyment of the citizens of the occupying power."

The ban came to light after the testimony of two Israeli army reservists who said that at the beginning of their tour of duty in May they were told that the purpose of the checkpoint was to "prevent Palestinians coming from the Jordan Valley to the Dead Sea beaches".

One of the reservists, Doron Karbel, testified that as a "side note", the Jordan Valley Brigade Commander, Colonel Yigal Slovik, had said the reason for the checkpoint was that "when Jews and Palestinian vacationers were sitting on the beaches side by side it hurt the business of the surrounding yishuvim [Jewish communities]."

Mr Karbel added: "In a conversation I later had with the Brigade Commander, he told me that he could come up with or find a security justification if he needed to."

From Ein Gedi southwards, the beaches on the Dead Sea's western side are in sovereign Israeli territory. But the popular beaches of the northern Dead Sea are Israeli-run and visitors could easily – but erroneously – imagine they are also in Israel rather than in occupied territory. In April this year, the British Advertising Standards Authority required the Israel Ministry of Tourism to alter the wording of an advertisement suggesting that Qumran, close to the northern shore, and the site of the discovery of the Dead Sea Scrolls, was in Israel.

In the Acri petition, Ms Yehuda says: "The illegality of the actions and orders of the army cries out to the heavens. This is a clear case of misusing security considerations as camouflage for achieving other goals which are unrelated to security matters and unacceptable."

Israel has also been criticised for segregating roads used by Israeli motorists in the West Bank for stated reasons of security. Israeli officials reject claims that this is racial discrimination, partly because Arabs with Israeli citizenship are permitted to use the roads. They also frequent the Dead Sea beaches.

The Israeli military declined to comment in detail while judicial proceedings are under way, but said in a statement that "the network of security crossings in the West Bank was erected in response to the extreme terrorist threat and violence during the second intifada." Since the violence had "ebbed" crossings were "under review".