I HAVE A DREAM 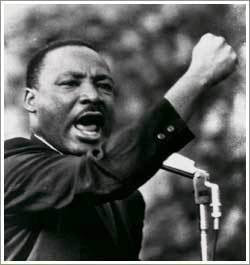 "I Have A Dream" is the popular name given to the historic public speech by Martin Luther King, Jr., when he spoke of his desire for a future where blacks and whites among others would coexist harmoniously as equals. King's delivery of the speech on August 28, 1963, from the steps of the Lincoln Memorial during the March on Washington for Jobs and Freedom, was a defining moment of the American Civil Rights Movement. Delivered to over two hundred thousand civil rights supporters, the speech is often considered to be one of the greatest and most notable speeches in history and was ranked the top American speech of the 20th century by a 1999 poll of scholars of public address.[1] According to U.S. Congressman John Lewis, who also spoke that day as the President of the Student Non-Violent Coordinating Committee, "Dr. King had the power, the ability and the capacity to transform those steps on the Lincoln Memorial into a modern day pulpit. By speaking the way he did, he educated, he inspired, he informed not just the people there, but people throughout America and unborn generations."[2]

At the end of the speech, King departed from his prepared text for a partly improvised peroration on the theme of "I have a dream", possibly prompted by Mahalia Jackson's cry "Tell them about the dream, Martin!".[3] He had delivered a speech incorporating some of the same sections in Detroit in June 1963, when he marched on Woodward Avenue with Walter Reuther and the Rev. C.L. Franklin, and had rehearsed other parts.[4]

Best speech ever heard. Wish everyone had the same dream