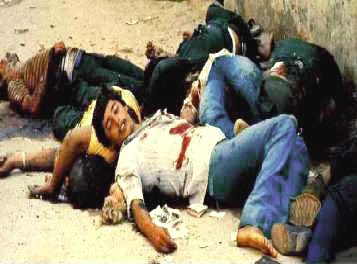 What happened at the Sabra and Shatila refugee camps in 1982? Part 3

In May 1985, Muslim militiamen attacked the Shatila and Burj-el Barajneh Palestinian refugee camps. According to UN officials, 635 were killed and 2,500 wounded. There is no record of any protests or public investigation.

In 2001, Palestinian survivors of the massacre demanded that Prime Minister Ariel Sharon be indicted on war crime charges in Belgium under a 1993 Belgian law that allows this type of complaint to be filed by non-nationals. This case is unlikly to proceed since, under international law, heads of state and prime ministers cannot be brought to trial while serving. There may also be other legal barriers based on Belgian non-conformity with international law and that would deny them jurisdiction.

International law experts believe it is highly unlikely Sharon will be brought to trial, given the rulings contained in the 1949 Fourth Geneva Convention, which deals with the protection of people in times of war. Sanctions apply only to a person who either has committed the acts himself or has ordered them to be committed, not the kind of indirect responsibility Sharon is alleged to have.

On the question of a failure to act to prevent a war crime, the International Committee of the Red Cross' interpretation of the Geneva Convention suggests no legal responsibility is incurred by those who do not intervene to prevent or to put an end to a breach of the convention.

Why have so many Muslims come to hate the West? In this controversial three-part series filmed in Lebanon, Gaza, Israel, Egypt, and Bosnia, Robert Fisk—award-winning Middle East and Balkans correspondent for the London Independent—reports on Muslim unrest as ideology, religion, history, and geography come into conflict. To the Ends of the Earth compares the plight of Muslims in Egypt and Bosnia. Though separated by geography and the distinct cultures in which they live their lives, this video reveals the feeling of betrayal by the West experienced by these two Muslim communities. Interviews with Islamic freedom fighters and war casualties shed light on the dynamics of the ongoing struggle for the survival of these communities. http://www.islamictorrents.net