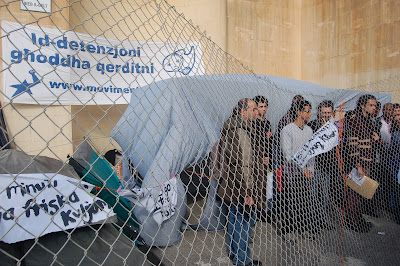 Moviment Graffitti, Migrants’ Solidarity Movement, Jesuit
Refugee Service, Third World Group, MAX (Moivment Azzjoni
Xellug), Kopin, Alternattiva Demokratika Zaghzagh and
Zminijietna felt they should remind the public that during
Christmas time – a time of merriment and celebration -
there are also people who are experiencing severe stress and
difficulties in Malta’s detention centres. We are doing
this by symbolically re-enacting the space of a detention
centre, where we will be raising awareness about the
detention system and where we will be sleeping in solidarity
with the migrants held in these centres.

The message we want to pass on is that the detention system
in Malta is creating unnecessary suffering. People’s
liberty is being arbitrarily taken away when they are locked
away for up to 18 months in small spaces, with lack of
hygiene, limited access to medical care, lack of fresh air
and complete uncertainty about their situation and their
future. Even those who don’t spend the full 18 months
inside detention centres, are still being locked up
needlessly for a very long time. This state of living is
causing people physical as well as grave mental damage. It
is quite inevitable that this kind of situation is creating
a lot of tension and frustration within these structures. We
acknowledge that it is not only the immigrants who are badly
affected by this situation but also the soldiers and persons
working with the Detention Services, who have to work in
very difficult conditions.

We believe that the policy of detention is unjust because
it is arbitrarily imprisoning persons who have committed no
crime. It is a fundamental human right that any individual
who flees his/her country of origin can ask for asylum in
another country. Most of the immigrants come to Malta
undocumented because they have no other way of leaving their
country.

Above all we cannot understand the reasons for the use of a
detention system. Surely, it is not going to deter people
from landing in Malta as many of the immigrants end here
only after encountering difficulties at sea during their
journey to Italy. Malta was not their destination of choice,
not because of detention, but because it is a very small
island. The argument that detention is needed for the
identification of persons doesn’t hold water. The
detention system doesn’t in any way help to identify
undocumented migrants. This identification can be carried
out more effectively if immigrants are in open centres. It
is also quite obvious that people with criminal intentions
will travel with passports, and not on little rickety boats
whose possibility of drowning is quite high. Furthermore,
detention gives an impression that immigrants are criminal
and dangerous. We believe that this contributes to the
presence of racism and xenophobia in Malta,
because it criminalizes people who are seeking refuge. The
detention system is therefore also a waste of financial and
human resources.

Because of all the reasons stated above, the eight
organisations here today are appealing to the Maltese
authorities to re-consider the detention policy. Moreover,
we insist that while this system is still in place, the
Maltese government should ensure that:

1) the time migrants spend in detention
is drastically reduced

2) the conditions inside detention
centres are improved

3) vulnerable groups, such as pregnant
women, children, persons with a disability and people
suffering from post-traumatic stress disorder, are not sent
to the detention centres.