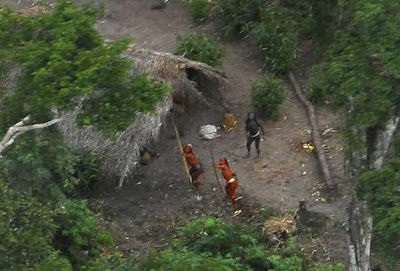 Three near-naked figures are visible in the forest clearing. Two of them are men, their bodies daubed with a red dye, and they are aiming their bows at the sky. A third figure appears to be a woman, her body blackened and only her pale hands and face betraying her natural colour.

This remarkable photograph is the first proof of the existence of one of the world's last uncontacted tribes. Taken from a plane that was flying low over the canopy of the Amazon rainforest near the border between Brazil and Peru, it could play a vital part in ensuring the tribe's survival.

"We did the overflight to show their houses, to show they are there, to show they exist," said José Carlos dos Reis Meirelles Junior, an expert on the remote tribal people who live beyond the boundaries of the modern world. "This is very important because there are some who doubt their existence."

Mr Meirelles, who works for FUNAI, the Brazilian government's Indian affairs department, said they first encountered the group on a morning flight earlier this month and saw dozens of people dotted around a clearing with two communal huts. When they returned later the same day, the impact of the earlier flight was clear. Most of the women and children had fled into the forest, he said, and those that were left had painted their bodies, taken up arms and appeared to be on a "war footing".

Experts believe that the hostile response is a clear indication that they understand that contact with the outside world spells danger. Across the border in Peru, similar tribes are being driven from their lands by aggressive oil and mining interests and illegal loggers.

Peru's President, Alan Garcia, has openly questioned the existence of uncontacted tribes. Meanwhile, evidence of the destruction of the forest has been piling up down river in the Brazilian state of Acre, where barrels of Peruvian petrol have washed up along with debris from logging operations. "What is happening in this region [of Peru] is a monumental crime against the natural world, the tribes, the fauna, and is further testimony to the complete irrationality with which we, the 'civilised' ones, treat the world," said Mr Meirelles.

After a decades-long political battle, indigenous groups now have their land rights protected under Brazilian law. The London-based charity Survival International is leading calls for Peru to act in accordance with international law and protect the tribes on its territory.

Survival's Fiona Watson, who recently returned from the region, said that Indians fleeing over the border into Brazil could be driven into conflict with uncontacted tribes already living there. "It is clear from this photograph that they want to be left alone," she said.

Encounters with the outside world are typically fatal for these tribes, who have no defences against the common cold and other commonplace diseases. "The groups are often fragments of much larger tribes that were overrun in the past and have died from disease or at the barrel of a gun," said Miss Watson.

The experience of the Akunsu tribe in neighbouring Rondonia, contacted a little over a decade ago, is not unusual. Today, only six members of the tribe survive. All relatives, they cannot marry and the group is expected to die out within a generation.

One of the survivors said they were overrun by loggers who sent gunmen into their areas to drive them out. Under Brazilian law, land occupied by Indians cannot be cultivated so ranchers make sure that no Indians survive.