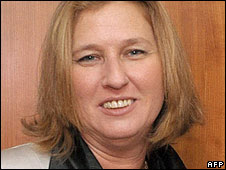 Israeli PM Ehud Olmert's party should prepare for possible elections, his party deputy has said, amid calls that he step down over corruption claims.

Foreign Minister Tzipi Livni, tipped as a possible successor to Mr Olmert, said Kadima should prepare for "every eventuality, including elections".

On Wednesday, a key ally said he should take leave of absence or resign. 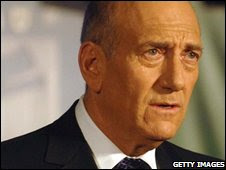 "I think the reality has changed since yesterday and Kadima has to make decisions in relation to what it does," Ms Livni told reporters in Jerusalem.

"I suspect that Kadima needs to start right away acting for every eventuality, including elections."

She also said she favoured holding a party primary to give the public a say in choosing a leader, and to "restore the trust" in the centrist party.

Mr Olmert said on Wednesday he was "not going to give up", after Defence Minister Ehud Barak, warned he would take his Labour Party out of Mr Olmert's ruling coalition if he did not step down.

The prime minister has not been charged, but has said he would resign if indicted - which would be expected to lead to early elections.

Correspondents say the growing uncertainty over Mr Olmert's future casts doubt over Mr Olmert's ability to press forward current peace talks with the Palestinians, with his weak domestic political position likely to make it harder for him to negotiate.

Mr Olmert, the head of the Kadima party, admits accepting funds before he became prime minister in 2006.

But he insists they were legal contributions towards his campaigns for re-election as Jerusalem mayor and for the leadership of the Likud party.

He has previously said he has no plans to step aside unless he is charged.

Kadima has just 29 MPs out of a total of 120 seats in the parliament, the Knesset, and relies on the Labour Party's 19 MPs as key allies in its governing coalition.

On Tuesday, the US businessman at the centre of the allegations told investigators that he gave Mr Olmert envelopes full of cash.

Morris Talansky was questioned by investigators, and is due to be cross-examined by Mr Olmert's defence team in July.

Testifying in an Israeli court, Mr Talansky said he handed over about $150,000 of his own money to Mr Olmert, directly and through aides, over a 15-year period.

The rest of the money came from fundraising.

He said he did not know how the money had been spent, adding: "I only know he loved expensive cigars. I know he loved pens, watches."

In another case, he said, he walked to a bank to withdraw $15,000 in cash for a loan as Mr Olmert waited in a luxury hotel.