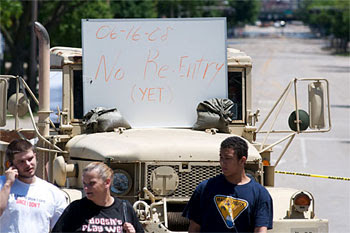 People who attempt to gain access to their home before it has been "cleared" by authorities are being apprehended, and those who attempt to drive around police checkpoints that have been set up in the affected areas are arrested at gunpoint.

Shocking footage out of Cedar Rapids Iowa shows cops and government employee "strike teams" breaking into houses of flood victims and threatening anyone who questions their actions in complete violation of the 4th amendment right that protects against unlawful search and seizure.

No warrant, no knock home invasions are being carried out on the flimsy pretext of "checking for structural damage" as cops harass and threaten with arrest people who refuse to have their homes ransacked by thugs in uniforms.

Cedar Rapids police chief Greg Graham promised residents over the weekend that "Law enforcement officers are not entering homes," and that firefighters would only enter homes through unlocked doors and windows yet the video clearly shows locked houses being broken in to.

People who attempt to gain access to their home before it has been "cleared" by authorities are being apprehended, and those who attempt to drive around police checkpoints that have been set up in the affected areas are arrested at gunpoint.

Angela Tague, a member of the STAR 1 search and rescue team from Ames, ran into any angry homeowner on E Avenue NW.

"He was saying ‘Where do you live?’ and ‘How would you like it if someone busted your door open?," Tague said.

Police Officer Josh Bell later had a heated exchange with the man, and told him that if he didn’t go back inside his house and stop harassing the strike team, he would be escorted out of the area.

The man was visibly agitated about his broken door and pointed at Bell.

So people who are uncomfortable with jackbooted thugs breaking down their door without even knocking and express their distaste for it are to blame for "harassing the strike team"?

Respondents to the You Tube clip and the newspaper article expressed their outrage at the behavior of those in the video tasked with "helping" flood-stricken people yet doing nothing more than intimidating and invading their homes.

"You break down the door of my private residence and when I object you threaten to escort me off my own property. Fine example of police work. Did anyone think to knock first? Thomas Jefferson said that the main reason for citizens to be armed was to protect themselves from tyrannical government. If this isn’t tyranny then I don’t know what is. A man’s home is his castle," states Steve Delaloye.

"A sad day for America when government thugs abuse the trust of the citizenry like this," writes one.

"So these cops and fire fighters are part time structural engineers, or what?? What are they inspecting for in the structures? Gas and electric could be shut off at the source, and any spills are so diluted they wont catch fire. The police chief said no police would enter any homes, and what do you know, mr fat ass cop goes piling through the window thinking he’s T.J Hooker. Damn, this is just sad, sad , sad," adds another.

One Iowa resident expresses her anger that authorities will not let her re-enter her home.

"I sit here with tears streaming down my face. I have been trying to be patient and await to enter my home. Now today, I am told there will be no re-entry’s until further notice. I cannot express how ****ing mad I am. I understand the houses can be unsafe. Just let me at least see my house, so that I can assess if it hit my top floor. I have pictures and memories on my top floor of my deceased mother, all I want to do is rescue those," she writes.

As we reported in 2005, Hurricane Katrina was exploited by the federal government and used as a martial law drill while victims were abused and treated like rats in a laboratory.

Door to door gun confiscations were ordered and cops ransacked homes and took weapons from multi-million dollar homes which were in the high and dry areas and completely unaffected by the hurricane. In some cases, residents were kicked out of their own homes for no reason.

Outrageous footage showed cops seizing handguns from the home of a grief-stricken old women as they assaulted and punched her in the face.

Where does the government think it derives the authority from to break into people’s homes whose lives have already been devastated by massive floods on the flimsiest of pretexts?

The 4th amendment states, "The right of the people to be secure in their persons, houses, papers, and effects, against unreasonable searches and seizures, shall not be violated, and no Warrants shall issue, but upon probable cause, supported by Oath or affirmation, and particularly describing the place to be searched, and the persons or things to be seized."

Even if there was a legitimate reason to inspect homes, why on earth do they not even bother to knock on the door?

Cops immediately attempt to break in or climb through windows uninvited because this procedure is all about sending a message - when a crisis unfolds we are the bosses and you - the peasants - will yield to our tyranny.

Lawsuits need to be filed immediately by people in Iowa and elsewhere who have had cops invade their homes in complete violation of the 4th amendment and a pretext needs to be set that will put a stop to the government’s routine exploitation of natural disasters as an opportunity to impose martial law measures on needy victims that have already had their lives devastated.

With reports indicating that the Mississippi river is in danger of bursting its banks, the precedent that was set with Hurricane Katrina could be set to advance as government minions and jackbooted thugs across the country lick their lips at the prospect of kicking down more doors and harassing innocent people.

Contact the Iowa ACLU and demand they pressure the authorities to stop these illegal home invasions immediately.