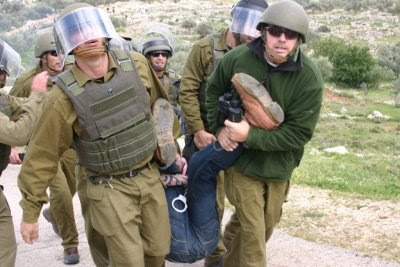 On Friday, villagers from Bilin, located near the central West Bank city of Ramallah, along with their international and Israeli supporters marched in their weekly nonviolent protest against the illegal Israeli wall built on the village's land.

Protesters carried banners demanding the removal of the Israeli wall and settlements and calling upon the international community to help Palestinians retain Jerusalem. Protestors also carried photos of Ibrahim Burnat who was injured during last week's protest by three live bullets fired by an Israeli soldier at a close range. Burnat He is still receiving treatment in the hospital.

The protests started after the mid-day Friday prayers were finished in the mosque, participants marched towards the separation Wall which separates the village from its land.

Immediately after the protest reached the gate of the Wall, soldiers showered the protestors with tear gas and rubber-coated steel bullets. Scores of protesters were treated for gas canisters. Israeli troops used a new tear gas launcher which fires thirty canisters in one barrage. They also used a high pitched ‘scream’ device in an attempt to disorientate demonstrators. Two people were injured as a result of the rubber-coated steel bullets; Muheeb Albarghutee a journalist from Al Hayyat Al Jadeedah newspaper and Ranny Burnat a local activist.

Last night Israeli occupation forces forcibly removed Palestinians inside an outpost built to monitor attempts to seize more land from the village. At midnight Abdullah Abo Rahma, Ahmad Ibrahim Abo Rahma and Farhat Ibrahim Burnat were beaten and detained before being forced back to the other side of the fence. Israeli soldiers also attacked the house of Muhammed Tawfiq Al Khatib and arrested his son Tariq.

In related newes After a joint request by residents of Bilin and Jayyos villages supported by the Adalah-NY coalition UNICEF confirmed this week that it would no longer accept financial or other support from Liv Leviev or his corporate entities.