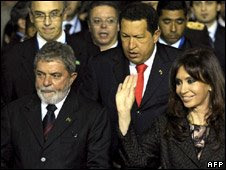 A directive passed by the EU last month could see illegal immigrants detained for up to 18 months and if expelled they face a five-year ban on re-entry.

There are hundreds of thousands of South Americans working in EU countries, many of them illegally.

The Bolivian leader, Evo Morales, said they did nothing to combat discrimination and racism, while Argentine Foreign Minister Jorge Taiana said the region did not accept the concept of migration as a crime.

South American leaders often find it difficult to reach agreement on many things but they appear to be united in their anger at the new EU immigration rules, reports the BBC's Daniel Schweimler from Argentina.

Most of South America's leaders are in the Argentine city of Tucuman where their summit plans to issue a declaration condemning the EU measures.

The European Union last month adopted the rules, which could come into force in 2010.

The law will oblige EU members to choose between issuing residency permits to the estimated 500,000 illegal immigrants who enter each year, or returning them to their country of origin.

Under the new rules, an illegal immigrant can be detained for a maximum of six months. This period is extendable by a further 12 months under certain conditions if, for example, the immigrant fails to co-operate with the authorities.

The rules allow for a 30-day voluntary departure period for illegal immigrants before their expulsion.

Once expelled, they may be barred from re-entering the EU for a five-year period.

On other issues, Mercosur says it is taking a big step towards regional integration by lifting visa restrictions, which will allow South Americans to travel freely between member and associate countries showing only their ID cards.

Other topics being addressed at the meeting which began on Monday and runs until Tuesday are regional and international food crises and on this there is no unity, our correspondent says.

"The chief cause of the world food shortage is poorly distributed wealth by oligopolies and financial institutions and lack of market access," she said on Sunday.

Brazilian President Luiz Inacio Lula da Silva, who is against tariffs, argues that producing more food would solve the crisis.

"The more (food) we produce, the more food security we'll have. With fair prices you can increase exports," he said.