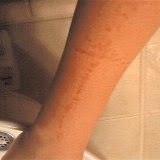 A public school teacher preached his Christian beliefs despite complaints by other teachers and administrators and used a device to burn the image of a cross on students' arms, according to a report by independent investigators.

Mount Vernon Middle School teacher John Freshwater also taught creationism in his science class and was insubordinate in failing to remove a Bible and other religious materials from his classroom, the report said.

School board members were scheduled to meet Friday afternoon to discuss the findings by consulting firm H.R. On Call Inc., hired by the district to investigate. The report was released Thursday.

The report comes one week after a family filed a federal lawsuit in Columbus against Freshwater and the school district, saying Freshwater burned a cross on their child's arm that remained for three or four weeks.

"With the exception of the cross-burning episode ... I believe John Freshwater is teaching the values of the parents in the Mount Vernon school district," he told The Columbus Dispatch in a story published Friday.